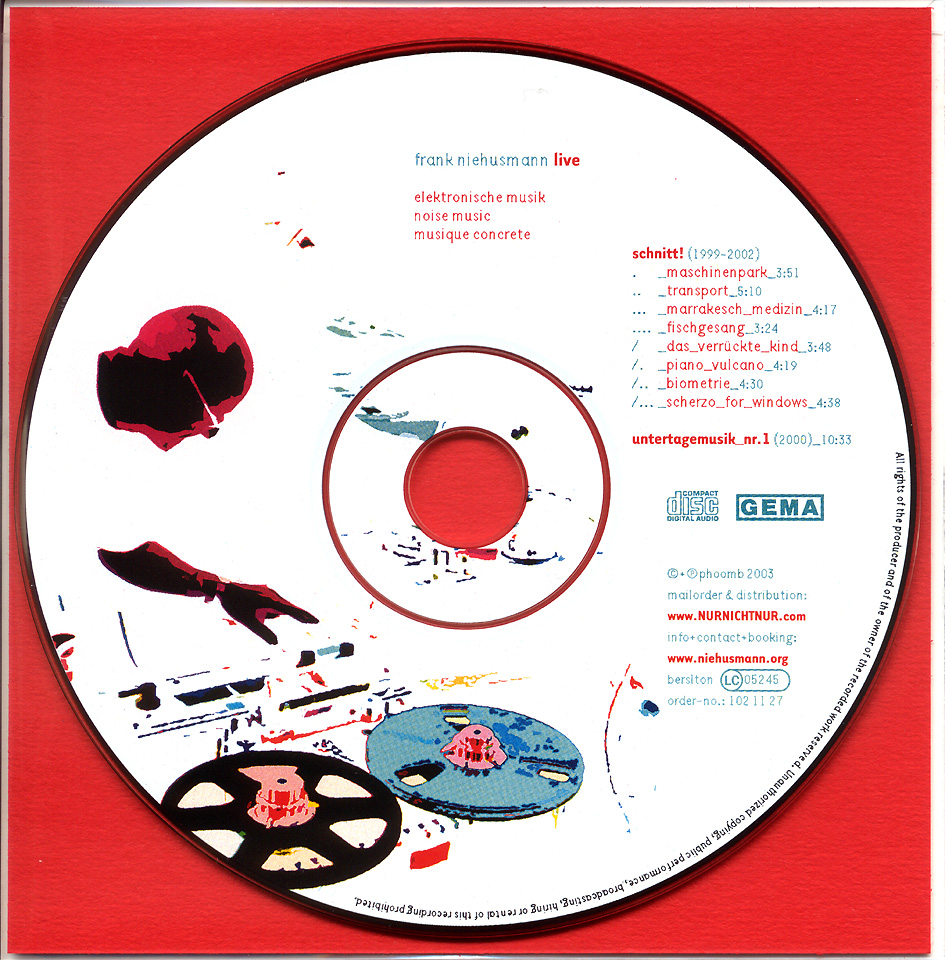 „The music of Frank Niehusmann is made with open reel analogue tape machines, and that is not a fancy plug in, which pro-tools offer you. Frank uses an eight track reel to reel on which there is one loop running, with eight different sounds, which he mixes in a live situation … Almost like a DJ, but with strictly his own input. „Schnitt“ is a recording of such a live thing, in eight different movements. Needles to say that this music, regardless of the input has a repetative element, from machine like structures, environment recordings, sine waves and Morrocan drumming. Quite a vivid play of sounds … Also on this CD is a piece called ‚Untertagemusik Nr. 1‘ … Apperentely the sounds were recorded 1000 meters underground, with very special recording-equipment. Since Niehusmann is from the highly industrialized Ruhr area in Germany, he went down old mines to do his recordings. Later on he manipulated these recordings via his analogue and digital working methods. The recording here is part of his usual programm for playing live … Highly industrial music with machine like sounds (that me think are impossible to record at such a depth, but who am I to disagree?), … a nice piece indeed.“
(Frans de Waard, in: VITAL WEEKLY no. 378/2003)

„Using two open-reel 8-track analogue tape machines. Skillfully Manipulating, mixing, real time, a noise and sound composition, with prepared sounds, tones and noises. It’s a mix of environmental recordings from everyday-life from different parts of the world recorded from his own travels, machines sounds, rewind fast forward squealing, trains, chanting, hypnotic singing, church bells mix with heart beats and sine tones, creating a dense, rhythmic network of cut-ups and noise, his mixes and knack of combining sounds set his work apart. I saw Frank perform a year ago, his tape machines are laid out in front of him with the tape loops hanging around him on hospital type drip stands, he calmly walks back and forth changing the loops, and manipulating the sounds it was a mesmerizing, and moving performance, which I think also works on CD.“
(Noisegate Magazin, London/UK)

„This CD contains two works the first of which is entitled ‚Schnitt!‘ – a work in eight parts and the second is entitled ‚Untertagemusik Nr.1‘, which won an award at the 29th International competition of electroacoustic music and soundart in Bourges, France 2002. Niehusmann works in the tradition of musique concrète by mainly using live manipulations of analogue reel to reel tape recorders. The opening piece Machinenpark is a crashing explosive mixture of found sounds some of which are very raw and unprocessed sounds such as swishing water along with helicopter noises and other looped soundbites. Other sounds are not so easy to identify and provide the almost destructive sound of metal being struck by some implement and crunching machinery giving a rhythmic feel to the piece. Each section of ‚Schnitt!‘ seems to have its own theme for example the second piece transport is a live-loop-scratch-concert based mainly on parts of a radio play as well as noises and sounds such as that of a train which introduces the piece. It also includes many laughter samples, crows cawing etc. creating an interesting and somehow amusing soundscape. Other sections include mixtures of samples of drummers in Marrakesch, car horns, German industrial mills, synthetic FM, Scottish bagpipes and all manner of everyday found sounds. Niehusmann combines all these fragments, cuts and passages into complex rhythmic and layered soundscapes and is not afraid to use naked un-manipulated samples to produce this musique concrète environment in the original old-style way. An interesting barrage of sound is constructed using loops, scratching, forwards and reverse movement, starting and stopping. The last piece on the CD Untertagemusik Nr.1 shows a more intricate composition based on samples recorded approximately 1000 meters deep in a coal mine. The samples were digitally manipulated and prepared afterwards and later copied back onto an 8-track analogue tape loop where rhythmical structures were assembled. What results is a complex view of this underground world. The wealth and range of sounds on this album make for a colourful and stimulating listen.“
(Paul Bijlsma, in: Phosphor Magazine 2003, www.xs4all.nl/~phosphor)

„Live presents two works, ‚Schnitt!‘ (in eight movements, 34 minutes) and ‚Untertagemusik Nr.1‘ (11 minutes). They were created using the same technique. Frank Niehusmann first digitally prepares a collection of samples and sound bites which he then aligns on a reel of tape. In performance he uses one open-reel tape machine as a crude sample playback device and an 8-track open-reel tape recorder to loop the sounds, add, bounce and delete material, building the pieces in real time. The technique may sound crude, but it adds a visual, physical element to the live performance that laptop artists can only dream of. ‚Schnitt!‘ consists of eight separate ’scenes‘, each featuring its own sound theme: industrial machines in ‚Maschinenpark‘, cars, subways and trains in ‚Transport‘, field recordings from Marrakech in ‚Marrakesch Medizin‘. There’s even a reel of Microsoft Windows sound files. Some of these settings are far from being innovative, but Niehusmann’s original approach yields interesting results. The precision required to cue the source tape, extract a specific sound, punch it in and later edit it out, keeping track of eight sounds at a time while keeping the whole thing cohesive and exciting is no small feat. ‚Untertagemusik Nr.1‘ is an apple from the same tree. Here, the sounds on the source reel have been recorded one thousand meters underground, in a mine. Mineshafts clank, rock drills buzz and a synthesizer adds an odd (and not always welcome) touch to this symphony from another era of industrialization.“
(François Couture, in: All Music Guide – 2003)